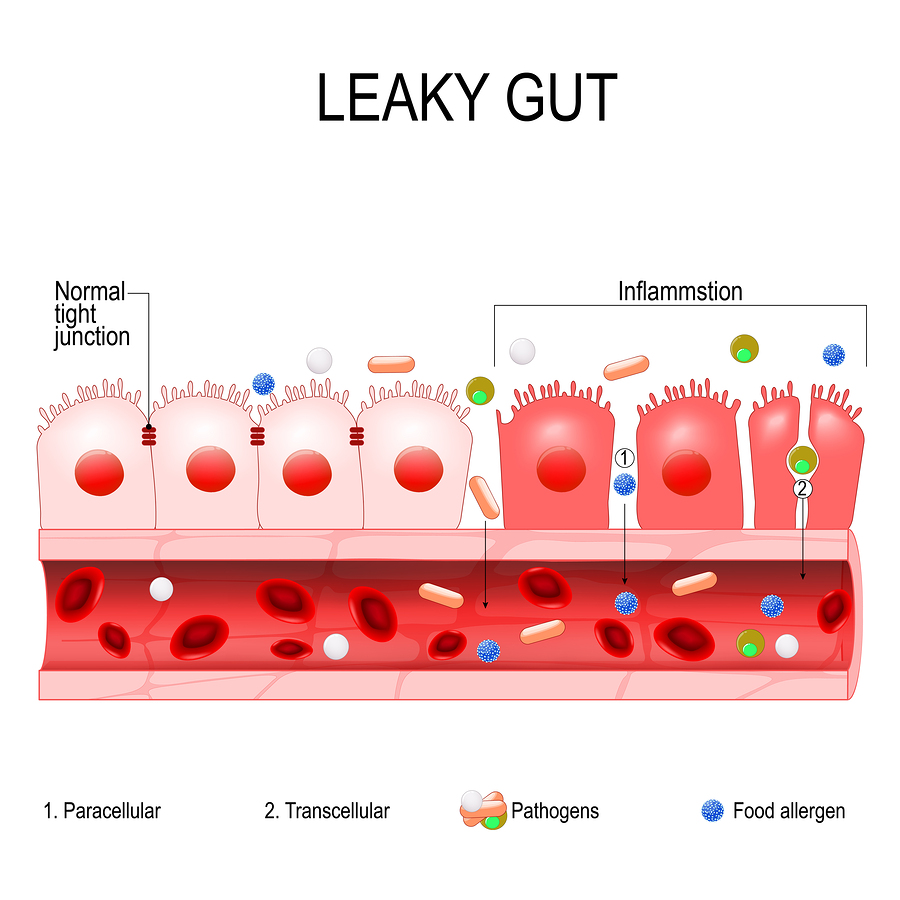 You may have heard about leaky gut as something some people suffer with or maybe it?s been suggested that you have it. Leaky gut is a condition that is increasingly being diagnosed in the world of nutritional medicine and integrative health and is associated with many chronic health conditions, so what is it, why does it happen and what does it mean to have leaky gut?

The correct term is intestinal hyper-permeability and it describes an issue with the digestive system where the lining of the small intestine become overly porous. The small intestine is designed to be permeable. It is how we are able to absorb the nutrients from our food within the intestine, into the blood stream, where the nutrients then get circulated around the body to nourish our cells.

Due to numerous diet and lifestyle triggers,  these tiny openings within the gut wall can become too large, allowing far more than just nutrients to pass into the bloodstream. Poorly digested proteins, for example gluten, a protein found in wheat, rye and barley and other food particles and  pathogens can pass through the gut wall and once in the bloodstream, the immune system detects foreign invaders are present in the blood and initiates an immune response against them. Put simply, this immune response puts the body in a state of high alert and inflammation, and if this is sustained over a long period of time, symptoms can be extensive and debilitating. From extreme fatigue to skin conditions; joint pain; bloating and/or disrupted bowel function / IBS; food cravings; weight gain; fluid retention are all commonly experienced. If this situation continues, it may also lead to allergies and food sensitivities to the very foods you are eating regularly as particles of these foods are in the blood, triggering the immune system to produce antibodies against these foods. Hence, food intolerance testing may be more helpful at highlighting leaky gut rather than an issue with specific foods per se.

Many people also suffer with frequent headaches, brain fog and mood disorders, a sign that the toxins leaking through the intestinal barrier are passing across the blood brain barrier, which can also become ?leaky?. It is also becoming increasingly accepted that many, possibly all auto-immune disorders, are at least in part triggered by a leaky gut, where the immune system becomes so overwhelmed by the toxic ?leaking? into the bloodstream that it can become confused and begin to attack healthy tissue by mistake.

What is happening within the lining of the gut is an opening up of the tight junctions, the gate keepers of the cells that line the gut. There are many potential causes and this is an area of on-going research and understanding but common factors known to trigger gut hyper-permeability are:

? Eating quickly / when stressed: we can only digested and assimilated well when we are in a calm and relaxed state. Poor chewing, eating quickly and on the go, eating when stressed and rushed over long periods of time can result in a weakened and damaged gut lining.

? Gluten:  For some people gluten, found in high levels in wheat, but also rye, barley, spelt,  is a major trigger, even if there is no actual allergy or obvious sensitivity to gluten. Gluten appears to increase levels of a protein we make in the gut called Zonulin, which controls the opening and closing of the tight junctions. The more gluten consumed, the more Zonulin produced, the more openings of the tight junctions.

? Lectins & Glyphosate: lectins are proteins in many natural foods but especially high and therefore problematic in grains (esp. gluten-containing grains), soy and cow?s milk. Lectins are hard to digest and thought to be common triggers for leaky gut. These foods are more of a problem now than in the past because they have high residual levels of a chemical used in their production, called glyphosate, a chemical that is used as a weed killer and crop desiccator (drying out the crop just prior to harvest) but is actually an antibiotic, which is known to not only negatively affect our vitally important healthy gut microbes but also triggers the tight junctions to open excessively.

? Sugar: With sugar being so ubiquitous in the modern diet,  it can also be a culprit for triggering leaky gut as sugar can facilitate an over-growth of sugar and yeast- loving microbes that upset the pH balance and function of the intestine, leading to a damaged gut wall.

? Refined cooking oils: often still hailed as healthybut widely accepted as inflammatory and damaging to the gut, cooking oils such as sunflower, corn, rapeseed, vegetable and soy oils are best avoided as much as possible.

? Other Factors: Poor sleep, excess alcohol, infections, diabetes, malnutrition and many other factors could cause this , but mending a leaky gut is not, by any means, an impossibility. Certain medications taken long-term and antibiotics are also potential triggers as can food additives, emulsifiers, flavor enhancers.

To heal a leaky gut, here are some dos and don?ts:

If you think you may have leaky gut, there are tests available to measure compounds in the blood that should not be there and must have come from a leaky gut. Lipopolysaccharides

are large molecules produced by our gut bacteria and should only ever exist in the gut. If they can be detected in the bloodstream, it shows your gut lining is porous enough to let these big, toxic nasties get through.  Also, you can drink a solution of large sugar molecules and these can then be detected in the bloodstream if your gut is leaky. However, before you go down this route, it is really worth putting in to practice my recommendations above, as all of them will not only help heal a leaky gut, but will aid in your overall well-being ? so nothing to lose and potentially so much to gain.

A quick word about garlic

It is pretty widely known that garlic is a really healthy food. The reasons behind…

Hello, I’m an HSP, please be gentle with me.

Do You Know Which Oils and Fats You Should Be Cooking With?

There is so much confusion about fats and oils. It's the one subject I have…