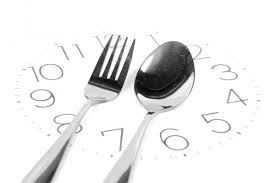 Ever since Michael Mosley’s Horizon programme ‘Eat, Fast and Live Longer’ was aired towards the end of last year, there has been an increasingly excited buzz about intermittent fasting (IF). Mosley wanted to find a way of gaining the benefits of low calorie eating without the misery. Based on long-term studies of people who choose to eat no more than 1000 a day, the beneficial effects of reduced calorie intake are not just for weight management but more significantly, a slowing of the ageing processes and improvements in blood fats, insulin sensitivity and certain disease markers.

Mosley concluded that the easiest way to gain the benefits of reduced-calorie eating is the 5-2 principle: eat normally 5 days of the week and eat only 500 calories (for women) or 600 calories (for men) on 2 non-consecutive days. The calories can be distributed throughout the day or eaten as one meal at whatever time suits best.

Mosley tried it for 3 month and reported back that his risk factors for type 2 diabetes and heart disease had significantly dropped, his energy had improved and he experienced significant fat-loss around his tummy – all very impressive!

Although far easier to sustain than a life of no more than 1000 calories a day, ever, it is still not that easy for many to fulfill the demands of the 5-2. So then came along the 16-8: eat what you would normally but eat within an 8 hour period on 2 consecutive days,? leaving 16 hours of no eating, only drinking herbal teas and water. This is far easier to maintain for many and appears to be very effective in terms of stimulating fat-burning, increasing insulin and leptin sensitivity and may also offer some of the anti-ageing benefits associated with the other systems above as it reduces insulin-like growth factor 1? (IGF-1) -? a key factor in taking the foot off the ageing pedal because the 16 hours of non-eating are enough to trigger metabolic changes in the body .

To enhance the effect of these metabolic changes and further reduce IGF-1 levels, having a workout towards the end of the 16 hour period appears to super-charge the effects, especially if you can manage some high intensity interval training. This would entail no eating after 6pm, going through until morning with no food, getting up and exercising and then having breakfast at around 10am . This may sound tough and the first few times you try this, it may well feel tough, but persist and your body will wise up and shift in to fat burning more readily, making it easier to work out on an empty stomach.

If all this is beyond your grasp, a simple and effective way to lose some weight is to commit to stopping eating by 6pm as often as possible. This will stop mindless snacking and late-night eating, both of which are key factors when it comes to putting on weight.

If you are considering trying the 5-2 or the 16-8, especially exercising while doing the 16-8, take it a bit easy at first and if you have any doubts, check with your doctor first.

Super-Foods – do they really exist?

The term Super-Food is banded about quite liberally these days. It's a great marketing buzz…

Why Stomach Acid is Digestive Dynamite

I have written about the importance of stomach acid before, but I wanted to cover…