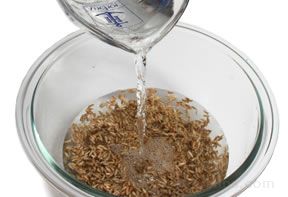 There’s a lot of confusion about grains, especially since the fervor of the Paleo movement, which is very anti-grains, as agriculture and therefore the growing and eating of grains, is a very new development in the evolution of man i.e. our digestive systems are not designed to breakdown and digest crops.

Many people are aware that refined grains (highly processed with the fibrous outer husk removed) are not as healthy as their lesser processed, whole counterparts. We’re talking brown rice rather than white rice, wholewheat bread instead of white bread, whole / jumbo oats as opposed to instant oats etc.

There are certainly few health benefits to refined grains, especially as they play havoc with blood sugar levels – refined grains are rapidly converted to glucose, causing a blood sugar spike, followed by a blood sugar crash, and trigger high insulin levels, which results in your metabolism being primed for fat storage rather than fat burning. Refined grains also contain few nutrients but are properly addictive – clinically so, making you crave more as they stimulate the same pleasure sensors in the brain as nicotine, opiates and heroin!

Whole grains are less processed. They haven’t had their bran and germ removed by milling, which makes them a better source of fibre and minerals such as selenium, potassium and magnesium. Whole grains are also more filling, so in theory you eat less. However, there is a caveat here … it is not recommended to eat lots and lots of grains, even whole grains, as they are high in carbohydrate content and they contain some anti-nutrients. All grains contain phytic acid. This binds with minerals like magnesium, calcium, iron and zinc and prevent them from being absorbed.

There is a way around this though – soaking. All grains should be soaked for at least 24 hours. This stimulates natural enzyme production of phytase which ‘eats up’ the phytic acid. Soaking also decreases levels of lectins found in all grains but especially high in wheat. Lectins, also found in nuts, seeds and beans, especially soy, damage the micro-villi – the tiny fingers that line your intestine allowing for healthy digestion. Damaged villi rapidly lead to malnutrition and many other digestive issues.

So, soak your grains and dramatically decrease their damaging effects while enhancing bio-availablity of the good nutrients they do contain: soak? oats (think bircher muesli), brown rice, pot barley and the pseudo grains quinoa and buckwheat too. Also get in to the habit of soaking almonds, Brazil nuts, hazelnuts, pumpkin seeds. You will enhance digestibility, texture and flavour.

A Momentary Pause Before Ploughing in This Festive Time

Christmas is coming?.and we?re all getting fat ? unless we choose not to!..... I am…

The low-down on fats, sugars and GI eating.

Over the next few weeks I will explaining all about good and bad fats, why…

Since when is olive oil not olive oil?